On August the 8th, 2012,  Committee members of the Republican Party, in an effort to control and limit your choice at the voting booth this November; filed a challenge in the Pennsylvania Commonwealth Court against the Constitution Party of Pennsylvania.

The Constitution Party, in order to overcome the unequal Ballot Access Rules which have been imposed by the two dominant political parties, collected over 35,000 signatures to allow our party and its candidates to be listed on the Ballot in November. What qualifies this as unequal is the fact that the Republicans and the Democrats are only required to obtain 2,000 signatures each, whereas the Constitution Party was required to obtain 20,601 signatures.

Aware that the Republicans would challenge the validity of these signatures, The Constitution Party of Pennsylvania filed 35,269 signatures with the Department of State Elections Bureau. After their review we were still left with 32,612 as signatures. We believed this would be more than sufficient to withstand any challenge. After this great expense in time, treasure and sweat, it now appears that it was all  for nothing.

It seems that the party which declares that it is for free markets is unable to uphold such principles when it comes to the political marketplace. How can they justify violating their free market principles? How can they justify shutting down their competition by making such unfair and unequal ballot access requirements in the first place? It can only be justified if they are willing to follow the Machiavellian principle of "the end justifies the means". They appear unconcerned when it comes to depriving you the liberty of voting your conscience for a candidate which most closely approximates your core values and beliefs.

Article 1, section 5 of the Constitution of the Commonwealth of Pennsylvania declares that "Elections shall be free and equal; and no power, civil or military, shall at any time interfere to prevent the free exercise of the right of suffrage." Has the erection of these ballot access rules by Pennsylvania's Civil Authority interfered with our right to suffrage?
Click on image to enlarge              These rules which were developed and passed by the two-party duopoly have only served to strengthen the monopoly fostered on us by the two dominant parties. We the people of Pennsylvania receive no benefit from these rules. On the other hand; we get to suffer the loss of more of our liberty as we are forced to choose between the two dominant party candidates. So much for land of the free and home of the brave…..Instead we have become land of the deceived and home of the slave!

The Constitution Party, being true to its namesake, seeks a restoration of our constitutionally limited government…..yes, the one “We the People” authorized in the first place.

This monster; often mistakenly referred to as “our government”, has incrementally usurped the powers which lawfully belonged to the States and to the People respectively. As many of our fellow Americans lived their lives and worked their jobs, they were totally unaware of these unlawful acts committed by our elected leaders. Over the years our chains have been quietly forged and deceitfully slipped over our hands and our feet.

Fortunately, there is a rare breed of patriot, sometimes referred to as constitutionalists. Despite being few in number, thin in the wallet,  unmercifully demonized in the media and looked upon by their own government as possible terrorists; they still remain true to their principles and their desire to be a voice for good within their respective communities. Are these patriots to be denied the choice of a constitutional candidate on the ballot?

Do we still live in a free society? I declare that the real meat and potatoes of our liberty have been stripped away, leaving us only with the vestiges of our liberty…the on the surface trappings which only serve as an illusion that we are still free. One example of such a trapping is our right to vote. Yes, we still have that right but it has been watered way down due to the limits and controls imposed by our two-party masters. When the choice you are given only permits you to choose the lesser of two evils, your choice must necessarily end in evil.

This two-party tyranny over the American people must end!  We can no longer allow the State and National party leadership of these two dominant parties to control our choices and deprive us of our precious liberty!

Is America over or will you and I stand to defend her in these dark hours? Is it worth the struggle to fight for a return of Justice and Liberty for all?

The responsibility rests upon your shoulders…it rests upon mine as well. If we don’t accomplish it, do you suppose that our children will? Can you perceive that putting it off on them may make the likelihood of success even more precarious and the cost even more unpleasant?

Let’s strive together to return the hearts and minds of our fellow brothers and sisters back to the wisdom and understanding of our nation’s founding fathers. At the same time we must all unite in turning our hearts to our children…..to concern ourselves with what type of society we will be leaving for them. If we fail to take this quest seriously and in a timely manner, our society will be doomed and the earth will be ultimately wasted! (see Old Testament/ Malachi 4:5&6) 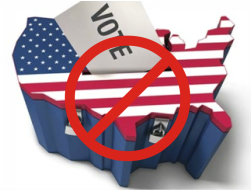 The Republican Party has succeeded in preventing the Constitution Party from representation on the ballot in Pennsylvania this November. Do you remember the colonists cry of taxation without representation?

Following a day plus of signature validation efforts by Constitution Party members and supporters, it became obvious that the whole process was not going well for the Constitution Party. During lunch on the second day, members and supporters met in private to discuss the numbers (i.e. the odds) of winning this battle. The Attorney for the Constitution Party consulted each member for their input. Many felt their numbers were improving significantly over the first day since they now knew more about the process. It was agreed upon to continue till the end of the day, reconvene and review the updated numbers before making a final decision.

Approximately an hour later, Constitution Party members were approached individually by their attorney and informed that they had been given an ultimatum from the Republicans: They had to either concede to the Republicans by 3:00 in the afternoon or they would start assessing their costs on the Constitution Party. They were told these costs could very easily exceed $100,000.00. Each Constitution Party member was then asked for their vote and invited to reconvene in private at 3:00pm for the results. At this meeting, Jim Clymer, Vice-Presidential candidate for the Constitution Party, relayed the bad news. Words of wisdom along with expressions of thanks and appreciation were given and received by all. The shedding of tears and the holding back of tears was evident around the room.

Pennsylvania, you have not only lost the chance to vote for more options; you have lost more of your precious liberty. Likewise, you have lost the ideas these candidates were bringing to the table; ideas which could have made for a better Pennsylvania. Now they have been struck from the political debate.

America, where is thy Liberty and why has she fled? Constitutional Patriots stand united in beckoning her return. With humble prayers, many plea before their Creator. They plea for the wisdom and strength to hasten her restoration. We uphold a vision of that glorious day when peace and liberty will be afforded to all. We pledge to continue this struggle despite any obstacle which the destroyer of liberty may throw across our path.