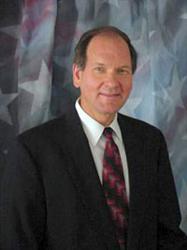 Goode, a six-term US Representative from the 5th District of Virginia, who previously had spent 20 years in the Virginia State Senate was nominated on the first ballot by the Constitution Party delegates on Saturday with 203 votes out of a total of 403 votes cast.  Clymer, who served 12 years as Constitution Party National Chairman, ran for US Senate in Pennsylvania in 2004, Lancaster County Commissioner in 2003 and in 1998 was the Lt. Governor running mate of the dynamic Peg Luksik.  He is the senior Partner in the Law firm of Clymer, Musser & Conrad, PC in Lancaster.
"The Goode/Clymer ticket is going to provide a stark contrast to the politics of big money special interests represented by Barack Obama and Mitt Romney.  Voters who believe that the average American still counts and that citizenship still matters now have a Presidential ticket that speaks for them.  Voters now have a Presidential ticket that is unequivocally pro-life, pro-family, pro-2nd Amendment and pro-traditional values.  They have a choice for constitutionally limited government that will protect and preserve liberty, not sacrifice and erode it as both Democrats and Republicans seem intent on doing," declared Clymer.

"This time, those who hold to the values and principles upon which this country was built do not have to throw their vote away on the  candidate they must guess will do the least damage.  Rather they can invest their vote with confidence in a ticket that represents their value.  The Democrat and Republican parties are like two trains racing toward a cliff at slightly different speeds.  I encourage Pennsylvanians from all parties and all walks of life to recognize that it is not enough to just change trains, but to change the direction in which our nation is headed,” Clymer added.

The Constitution Party must submit petitions with over 20,000 valid signatures of Pennsylvania registered voters by August 1 in order to qualify for the ballot in Pennsylvania.  It would not remain on the ballot (regardless of how well it does in the election) in Pennsylvania under current law unless at least 15% of the state’s voters are are registered in the party. This requires new parties such as the Constitution Party to be forced to acquire more than ten times the number of signatures required of the Republicans and Democrats to be placed on the ballot every two years.

Those wishing to help with the petitions are encouraged to contact the Constitution Party office in Lancaster at (717) 390-1993 or to contact the Pennsylvania Ballot Access Coordinator, Donna Fike, at secretary@constitutionpartypa.com for further information and to receive petitions.